Last month my teenage daughter attended the 65th Annual National Junior Classical League Convention. All week long from 6 am until midnight she and over a thousand students from all around the country were immersed in Latin, Greek and all things related to Classical Languages for the entire week.

The 2018 convention took place on the campus of Miami University in Oxford, Ohio. The theme of this year’s convention was, “Ego Vos Hortari Tantum Possum Ut Amicitiam Omnibus Rebus Humanis Anteponatis” or “I urge you, as much as I am able, to place friendship before all human issues.”

You might be wondering what my daughter’s study of Latin has to do with cryptocurrency. Actually, I’ve been extremely busy in a new position as a software developer for a cryptocurrency portfolio platform, so I haven’t updated Cryptobellum as much as I would have liked in recent months. Writing about her recent experience at the annual National Junior Classical league conference is an easy way for me to quickly update Cryptobellum and keep the Google bots happy, but more importantly it gives readers the background on how Cryptobellum got its’ name. And I can also increase my word count by mentioning (bragging?) that my first born also was inducted into the National Latin Honor Society earlier this year.

When I decided to create Cryptobellum in February of this year, literally every single domain name I thought of was already taken. I had gone through nearly two dozen names that I thought were brilliant to discover that apparently other people thought the same thing. I finally found one that was available, Cryptrillion. So, I registered it and went about my day. Later on that same day, I realized Cryptrillions was already registered, and I didn’t want to establish a brand around a name in which the plural form was already taken. So, it was back to the drawing board.

I explained my dilemma to my high schooler, and she quickly suggested Cryptobellum because bellum is the Latin word for war, and to some extent there is an unspoken battle between cryptocurrency and fiat. Of course, we all know which will likely win out in the end! I’m predicting that USD will only be used to pay taxes within the next two decades.

If you’re interested in learning more about the convention my daughter attended, keep reading. From National Junior Classical League website, the following explains their mission, “Our purpose is to encourage an interest in and an appreciation of the language, literature, and culture of ancient Greece and Rome and to impart an understanding of the debt of our own culture to that of Classical antiquity.”

I reminded my daughter at least three times before she left for the convention how lucky she was to experience something like this. I would have loved to attend this convention when I was in high school! My only two experiences on a college campus while in high school included being selected as my high school’s sole ambassador to the Hugh O’Brian Youth Leadership Conference in Spring 1993 and also attending Pennsylvania Free Enterprise Week in the summer of that same year. And while both of those experiences were valuable learning opportunities, being exclusively focused on Classical languages for an entire week with like-minded students would have been really enjoyable.

The 2018 National Junior Classical League Convention consisted of a week-long immersion in athletic, academic and artistic competitions. Every day included Colloquia, which consisted of lectures on Classical-related topics. My daughter attended one on Roman graffiti. Each day also included the opportunity to take up to four tests over a 2-hour period. Test topics included Latin vocabulary, heptathlon, Greek derivatives, Classical art, and many more. Last year, my daughter placed in every test she took and much to her surprise placed 16th in Geography. Places are awarded for the top-50 ranked students. In some cases, hundreds take a particular test. She also placed in every test she took this year, a total of seven tests including topics such as Latin vocabulary, reading comprehension, and Classical art.

There were numerous social events to throughout the week, and she also enjoyed dressing up for the yearly Toga ritual. 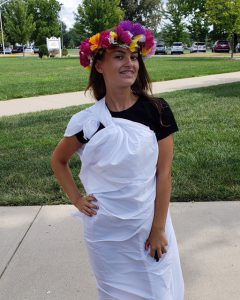 About Cryptobellum 69 Articles
Cryptobellum is a digital publication of Telesto Studios, LLC focusing on the cryptocurrency market and the underlying blockchain technology that fuels it. Created and managed by Sharon Moran, Cryptobellum also provides original features and covers AI and other technological advancements.

July 13, 2019 Cryptobellum Features Comments Off on Latin Words for Crypto

July 13, 2019 by Sharon Moran I previously wrote about how Cryptobellum got it’s name. If Cryptobellum were an actual Latin word, here is what its’ declension would look like:   While we’re at it, […]

Create a custom menu under "Appearance => Menus" in your WordPress dashboard to display social icons in this widget.