Satoshi Summary is a Cryptobellum exclusive named in honor of the pseudonymous creator of Bitcoin. It provides a weekly summary of the most noteworthy developments in the blockchain and cryptocurrency space.

The Bears Have Insomnia

A dramatic turnaround from 2017’s gains

This is what the cryptocurrency market looked like this past week according to an article on CoinGape. It was overwhelmingly a sea of red. 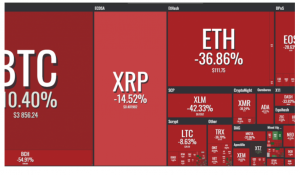 Despite the recent significant market downturn, progress in the cryptosphere is moving forward. Bakkt will continue trading a bitcoin futures contract in January. Also, Bakkt’s plans with Starbucks to build an ecosystem for digital assets is still on track.

According to a recent article in Entrepreneur, investment firm, Temasek is looking to explore opportunities in both AI and blockchain, and recently they invested in Blockchain Software Company and enterprise blockchain software firm, R3.

In an unprecendented move, Ohio becomes the first state to allow businesses to pay their taxes in bitcoin. The bitcoin program was spearheaded by Ohio state treasurer, Josh Mandel. Apparently, Ohio is attempting to make itself more tech-friendly. Perhaps, the state will eventually be known as The Buckeye and Bitcoin state.

Arwa Mahdawi bitshamed herself for buying bitcoin late last year in this opinion piece for The Guardian Despite her frustration, she would do well to remember that Hal Finney, the very first person in the entire world to receive bitcoin in a transaction, speculated that the price of bitcoin could one day reach $10 million.

About Cryptobellum 68 Articles
Cryptobellum is a digital publication of Telesto Studios, LLC focusing on the cryptocurrency market and the underlying blockchain technology that fuels it. Created and managed by Sharon Moran, Cryptobellum also provides original features and covers AI and other technological advancements. Sharon was first introduced to Bitcoin in 2009, and later tried her hand at mining Litecoin in 2014, but it wasn’t until 2016 when she began to study the programming behind blockchain that she finally realized the technology’s full potential. She enjoys exploring the intersection of AI and blockchain and holds a B.S. in Psychology/Philosophy and an M.Ed. Contact her at sharon@telestostudios.com

Alternate Reality Technology on the Blockchain?

A recent press release from DMG Productions announced that Fox Business will air an episode of Innovations w/Ed Begley Jr. television series later this year that will explore how blockchain technology is transforming alternate reality […]

The Cryptocurrency You Don’t Want to Ignore

March 9, 2018 by Sharon Moran New digital currencies and related cryptoassets are entering the crypto space every day. There is a recently launched cryptocurrency that is too good to pass over. Turtle Coin was […]

By Staff writer: Earlier this week The Guardian reported that researchers from RWTH Aachen University and Goethe University in Germany discovered that bitcoin’s blockchain contains files that store or link to child abuse imagery and […]

Create a custom menu under "Appearance => Menus" in your WordPress dashboard to display social icons in this widget.